Show Sidebar Log in
intermedial_studies News May 20, 2021 No Comments »

Like our newly-created Facebook page if you want to stay aware of what’s going on in Intermedial Studies.

It is still in its very early stages, but it will soon be filled with news and information about the field: 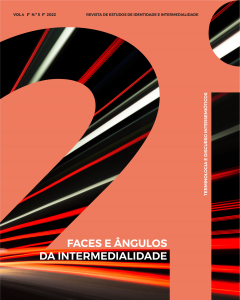 Facets and Angles of Intermediality: Intersemiotic Terminology and Discourse

There is unanimous agreement that media have had a transforming effect on social spheres in the last decades. In Cultura das mídias(Media Culture), whose first edition came out in 1992, Lucia Santaella pointed out how mainly instances of production and consumption reinvent themselves with new media. As the author herself emphasized, the use of the term media to refer to culture was new back then. In 2006, in Convergence culture, Jenkins, based on a perspective of the economy of culture and entertainment, suggested we think of these changes by looking at the convergence of media, at the time concentrating on the internet and, thus, signaling to the contribution of consumers. Though Jenkins uses the verb “to collide” when referring to the relations/actions between the “old” and “new” media, Santaella’s similar reasoning manifests itself here: media do not exclude each other; they interact in different ways.

The perspective of this interaction between media precedes the discussion that focuses on “the new media” or “digital media” and perhaps it is not necessary to explain the reason since it is more than commonplace to call attention to the different forms through which Biblical narratives are told to the ways cinema materializes at the beginning of the 20th century by adapting literature. Nevertheless, it is not misguided to state that the debates intensified with “media culture” as the speed and volume of cultural production potentially grew, along with the new technologies and their techniques that combine media, agents and forms. Thus, in the 1990s the concept of “intermediality” is used to challenge old notions that are still used today to understand the relations between media, the very notion of media, the perspective of art as an object of analysis, as well as interdisciplinarity and intertextuality.

Claus Clüver, in one of his most comprehensive texts for the study of intermedial phenomenon, published in 1997, underlined the interdisciplinary perspective of “inter-art studies” based on then little known concepts, whether through Literary Theory, Comparative Literature, Cultural Studies — such as intersemiotic translation and ekphrasis — or even the syncretic aspect of interartistic forms. Though Clüver described the phenomena of intermedial relations from the perspective of Inter-arts Studies, as the title of his paper indicates, he demonstrates how researchers have already brought up these interactions based on forms and texts that subvert the idea of the Arts as a conceptual criterion for the analysis of the phenomenon. Clüver’s two papers, “Inter textus / inter artes / inter media” and “Intermediality and interart studies”, published respectively in 2001 and 2008, update the focus of this analysis by eliciting the intermedial character of these relations and pointing to a north for what was then called Studies in Intermediality.

This very short and simple diachronic synthesis allows us now to state another commonplace: the mediatic culture today, the characteristic convergence of the always — or never — new media, the transdisciplinarity that the analysis of these phenomena demands, all point to the “Babel” that academic discussion on intermedial relations has become. While the difference — be it conceptual or methodological — among the multiple and varied fields and areas that observe intermedial phenomena is positive — as it is for the sciences in general — the focus of its discourse has become problematic, since, often, it adds to the noise in communication and, more than that, it ceases to cooperate and collaborate in understanding what is communicated, which is the basic and paramount reason for observing the relations between media.

By highlighting these issues, this dossier propels conceptual and methodological propositions, as well as the analysis of the phenomenon that derive from these, contributing to an interdisciplinary discourse for Studies in Intermediality. Therefore, this proposal intends to find the means for a dialogue that, attuned with the intersemiosis that is the focus of our study, can be understood and debated by researchers whose interests contemplate different semiotic systems.

Main topics accepted in this issue

The Organizing Committee of the 3rd Writing, Sound, Image International Colloquium is pleased to announce the Call for Creative / Artistic Productions. The conference is hosted by the School of Music, along with the School of Letters, the Fine Arts School, and the Department of Communication Studies of the Federal University of Minas Gerais (UFMG), Brazil. It will take place online, October 26- 29, 2021.

The previous editions of the Colloquium have been organized by members of the Intermedia Research Group, coordinated by Dr. Thaïs Flores Nogueira Diniz, aiming at the presentation and discussions of studies and artistic productions in the areas of Intermediality, Interarts Studies, and Intertextuality. The focus of this third edition is relations between Intermediality and Nature, especially on 5 topics below:
– Nature in Literature and the Arts
– The Anthropocene and Intermediality
– Intermediality in times of pandemics
– BioArt: Questions of language and ethics
– Educational practices and the reception of media products related to Nature

For the modality of Creative / Artistic Productions, we will accept submissions of works addressing topics related to the theme of the event. The productions are not required to be original; they may be individual or collective, be produced in several media (music, painting, installations, performances, digital media, among others) and made available by means of several different platforms, such as hotsites, Youtube, Instagram, and other social media. For submission, please fill this Form. The deadline is July 5, 2021.

Media Impact is a series of talks that give you the chance to take part in current research on how media choice affects communication, knowledge and meaning in art, popular culture, and media.

Learn more about the importance of being surprised, how knowledge is conveyed through computer games, what we do when we sing, how novels, films or poetry communicate the climate crisis, how music affects journalism, and what violence and classical music have in common.

All talks will be ca. 15 minutes long and streamed live online, with the chance to ask questions. The talks are free to attend, but you will need to register on the event page of the talk you want to join. The talks will also be video recorded and available to watch afterwards.

The talks are intended for everyone with an interest in media, culture and communication.