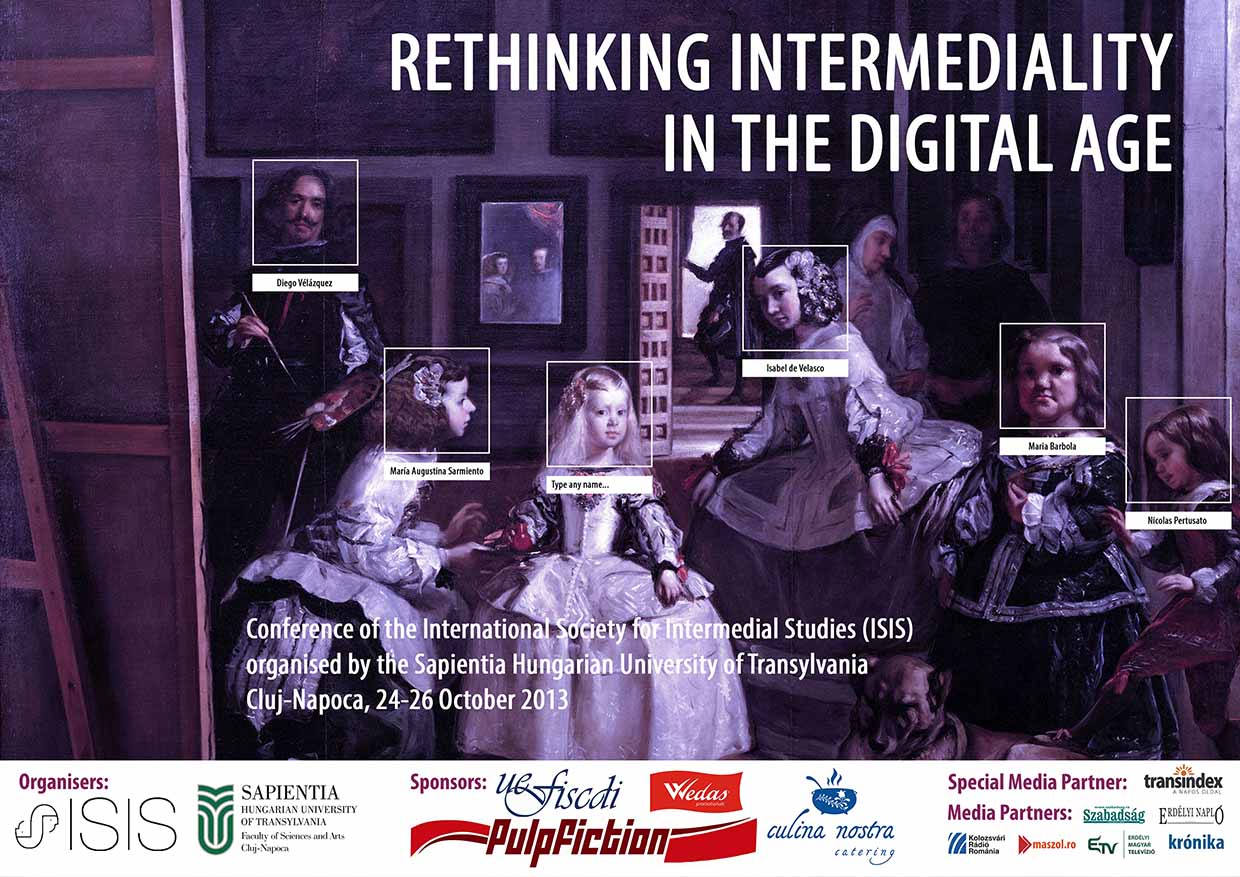 [Join the group to know more about this event]

In the past decades “intermediality” has proved to be one of the most productive terms in the domain of humanities. Although the ideas regarding media connections may be traced back to the poetics of the Romantics or even further back in time, it was the accelerated multiplication of media themselves becoming our daily experience in the second half of the twentieth century that propelled the term to a wide attention in a great number of fields (communication and cultural studies, philosophy, theories of literature and music, art history, cinema studies, etc.) where it generated an impressive number of analyses and theoretical discussions. “Intermediality is in” („Intermedialität ist in”), declared one of its pioneering theorists, Joachim Paech, at the end of the 1990s. However, we may also note, that since then other theoretical approaches introduced even newer perspectives that have not only revitalized the study of media phenomena in general but have specifically targeted the emerging new problematics raised by the new electronic media. Facing the challenge of the daily experiences of the digital age, discussions of media differences or ‘dialogues’ highlighting the ‘inter,’ the ‘gap,’ the ‘in-between,’ the ‘incommensurability’ between media are currently being replaced by discourses of the ‘enter’ or ‘immersion,’ and the ‘network logic’ of a ‘convergence culture’ in which we have a “free flow of content over different media platforms” (Henry Jenkins). At the same time the turn towards the corporeality of perception in all aspects of communication has also shifted the attention from the ‘interaction of media’ towards the ‘interaction with media,’ from the idea of ‘media borders’ towards the analysis of the blurring of perception between media and reality, of humans and machines – media being perceived more and more not as a form of representation but as an environment and as a means to ‘augment’ reality.

Nowadays media continuously mutate, relocate and expand, while connections between ‘old’ and ‘new’ media are being established with incredible fluidity. Accordingly, we may ask: what are the new perspectives for intermedial research in the digital age? While media are continuously changing and expanding, how can we relocate the “in-between”? If we consider ‘intermediality’ first and foremost ‒ as suggested by Jürgen E. Müller ‒ as a “research concept” (Suchbegriff), how can this concept be effectively applied to the media we see around us today? And if we believe that the “ecosystem” of contemporary media can be understood not as a unified digital environment that nullifies differences, but as a thriving and highly diversified, “multisensory milieu” (Jacques Rancière) that poses new challenges both for the consumer/producer and the theorist, how can we address these challenges? How do media differences persist and how do these differences still matter despite voices advocating the so called “post-medium condition”?

As the Society for Intermedial Studies launches its own expanded, international format (ISIS), we think it is timely to address once more the major issues for which this society exists, and to invite participants to examine new forms of ‘intermedialities.’ In doing so participants may address a broad range of questions relating to ‘old media’ and ‘new media,’ and their possible interactions, focusing on the wide array of intermedia phenomena and new type of relationships that new media have produced, but also on how pre-digital media relations can be re-evaluated, and how historical paradigms of intermediality may already be distinguishable viewed from the standpoint of the contemporary media landscape.