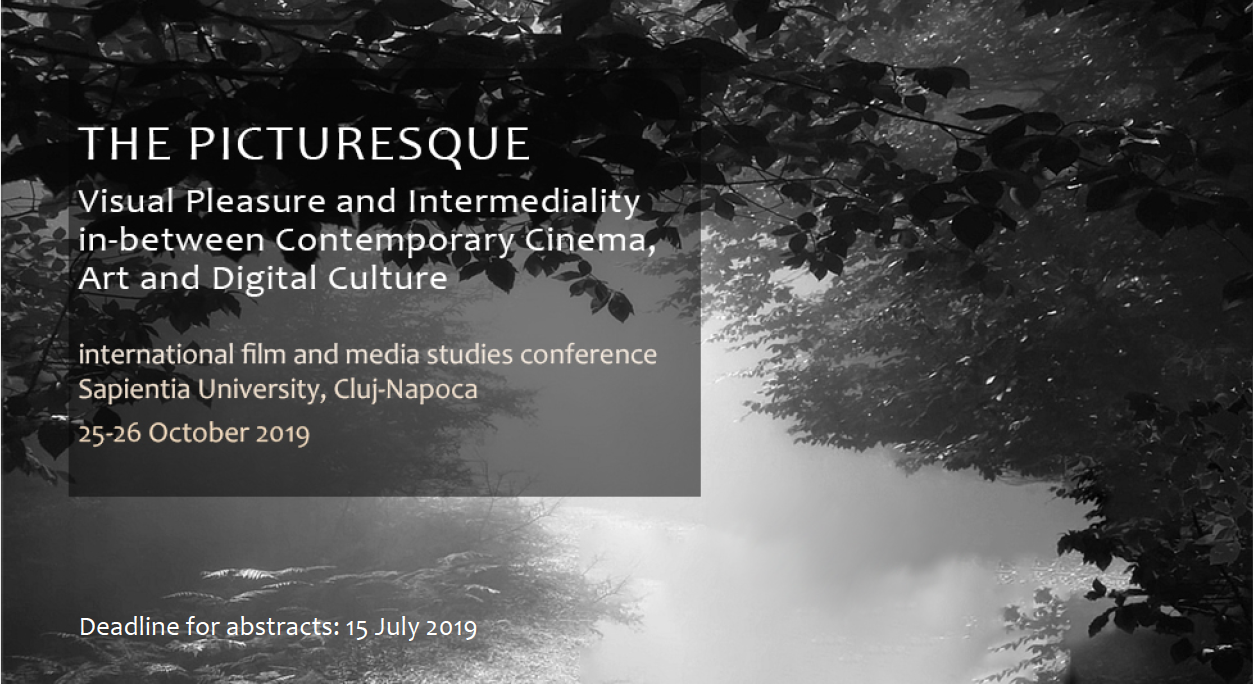 Continuing our series of conferences dedicated to rethinking intermediality in contemporary cinema and visual culture, we propose to initiate a discussion around aspects of intermediality that may unfold from the perspective of the picturesque.

The much-debated notion inherited from the art theories of the late 18th century originally denoted both an aesthetic quality (something pleasing to the eye situated between the serenely beautiful and the awe-inspiring sublime) and a particular visual impression (something that looks like a picture in nature). It anticipated and later became deeply entangled with many of the ideas of Romanticism, of modernity and postmodernity by shifting the appeal of images from knowledge to imagination, sensation and mood, by applying the frame of art to life, or the frame of one art to another, and emphasising the abstract aesthetic value of a kind of pictured vision. Photography appropriated it as a strategy of so-called pictorialism and popular culture perpetuated it in various forms of spectacularization from the early dioramas and panoramas to today’s ubiquitous digital screens through which we continually reframe our lives in picturesque images.

The picturesque emerges therefore not only as a transversal concept in art history or visual culture, but also essentially connected to issues of intermediality and in-betweenness that we would like to bring into focus. In a “beautifully circular” dynamics (Rosalind Krauss), in a “conjunction of nature, picture, eye” (Geoffrey Batchen) a given moment of the perceptual array is connected to recognizable patterns in a picture which always reveals the form of one medium perceived in another (e.g. painterly tableaux in photography, film, installation art, photographic frames in film, photos that look like film stills, etc.). As such, the picturesque directs our attention to the sensuous aspects of intermediality and their relevance in our so-called postmedia age, when the “photographic”, “the cinematic” or the “painterly” can be seamlessly merged through digital technologies.

We would also like to address the controversial aesthetics of the intermedial picturesque that foregrounds instead of a sublime Gesamtkunstwerk-like effect the sheer visual pleasure of imageness, and to highlight its range in this respect from the decorative and the playful to the contemplative. Keeping in mind the potentially “troublesome” aspects of “pretty” images (Rosalind Galt), we encourage proposals to consider their “politics” as well, which can either align with what John Ruskin described as the “heartlessness of the picturesque” (i.e. delighting in images of ruin and decay), or can imply a reflexive acknowledgement of their underlying tensions between art and life (by engaging Raymond Bellour’s and Laura Mulvey’s “pensive spectator”).

Accordingly, we invite proposals to explore the variety of intermedial strategies that generate visual pleasures associated with the picturesque in a broad sense, and to uncover their intricate relations of in-betweenness.

STEVEN JACOBS (Department of Art History, Ghent University), an art historian specialized in the relations between film and the visual arts. His research interests include the visualization of architecture, cities, and landscapes in film and photography. He is the author of: The Wrong House: The Architecture of Alfred Hitchcock (2007), Framing Pictures: Film and the Visual Arts (2011), The Dark Galleries: A Museum Guide to Painted Portraits in Film Noir (2013, with Lisa Colpaert) as well as the co-author of Screening Statues: Sculpture and Cinema (2017), and The City Symphony Phenomenon: Cinema, Art, and Urban Modernity Between the Wars (2018).

LAURA MULVEY (Department of Film, Media and Cultural Studies, Birkbeck, University of London), one of the most influential film theorists of our time. Her major works include: Visual and Other Pleasures (1989/2009), Fetishism and Curiosity: Cinema and the Mind’s Eye (1996/2013), Citizen Kane (BFI Classics series 1992/2012), Death 24x a Second: Stillness and the Moving Image (2006), together with groundbreaking articles on narrative film, feminist film theory, the aesthetics of stillness in the moving image, etc. She is also an avant-garde filmmaker who co-wrote and co-directed with Peter Wollen and Mark Lewis several experimental essay films.

A selection of papers based on the conference presentations will be published in our department’s international, peer reviewed journal (Acta Universitatis Sapientiae. Film & Media Studies) indexed in several international databases.

You can contact the organizers at this e-mail address: 2019.picturesque@gmail.com

For further information and updates see the official website: