International conference – The Literary Image and the Screen (University of Genoa, 2019) 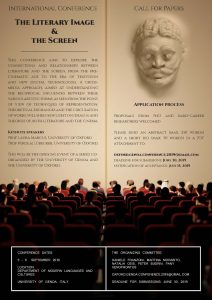 The Literary Image and the Screen – An International Conference

This conference aims to explore the connections and relationships between literature and the screen, from the pre-cinematic age to the era of television and new digital technologies. A cross-media approach, aimed at understanding the reciprocal influences between these artistic forms, as seen from the point of view of techniques of representation, theoretical exchanges and the circulation of works, will shed new light on ideas in, and theories of, both literature and the cinema.

The dialogue between different genres of literature and film has been crucial in their respective developments from the birth of cinema to the present day. Moreover, various texts and authors in the literature of the pre-cinematic era can be analysed through film techniques and regarded as, in some ways, anticipating them.

This observation can lead us to ask somewhat quirky questions: is it possible to perceive elements in Dante’s works which can be understood in terms of film editing? How and why does Flaubert use close-ups in his novels and can film theory offer further insight into his literary techniques? Could the study of light and colour in cinema be useful in discussing Modernist poetry or Surrealist prose? Such questions could also be asked in the opposite direction and we could apply techniques and approaches from literary criticism to the analysis of film.

Focusing on more recent timeframes one could go beyond film and ask: how do digital media, 3D technologies, virtual reality or computer-generated images trigger neo- modernist definitions of space in novels since the turn of the century? To what extent do latter-day TV series reproduce and engage with earlier forms of serial, literary fiction?

The official language of the conference is English.